The last couple of weeks have caused me to clap my hands and dance one moment, then hit my head against my desk the next.

Learning curves come in all shapes, sizes and levels of difficulty. An amazing editor who is ridiculously good at what he does made me alternately believe my brain had solidified into solid stone one minute, then consider myself a genius the next—when I finally got what he was trying to tell me. Okay, usually it took more than a minute.

By far the most difficult thing I've done is learn to be vulnerable by putting my work out there for people to read, and become tough and resilient by listening to their comments—good and bad. At this point, it's all personal. Don't let anyone tell you otherwise. That will probably change when people who don't know me, and I'm not paying, read the book.

Right now Red Tide is going through the publishing channels at Amazon. It will be available in either ebook or paperback versions.

It's done, and I'm actually excited to begin the edits for my next one.

It's all better with friends.
Posted by Peg Brantley at 3:12 PM 6 comments:

What's Next? And Thanks.

Some people have asked me what's next.

One thing at a time. First, I need to get Red Tide released. (Oh man, you authors will understand the awesome moment I just had putting my title in italics.) Assuming my editor's comments involve easily implemented changes I agree with, Red Tide should be available in a few weeks. As of this moment, I'm considering make Red Tide available exclusively through Amazon, but Red Tide will be in both print and ebook formats.

I have a second manuscript ready for the editing process. For me what seems to work is one or two self-edits, a couple of beta readers, and then a professional edit. This new book will reflect some old friends to people who read about them in a previous incarnation, but in some very different roles. It was the one I thought would be an easy rewrite, but ended up being a completely new story.

The last couple of days (in between swooning over the awesome cover designed by Patty Henderson) I've been getting a little more detail down on a third manuscript that I hope to begin writing soon. The insides of my elbows are itching to get going and that's a good sign.

Before any of this goes one more step, I need to say something.

What began as a dream headed in one direction—traditional publication—shifted. But the people who held me up then continue to do so today. The acknowledgement section in Red Tide is likely to be extensive. I have so many people to name. This book absolutely did not happen because of me. It happened because of a whole lot of people. And you humble me.


It's all better with friends.


Posted by Peg Brantley at 6:26 PM No comments:

Here's the cover for Red Tide. Patty did an amazing job. I knew it was the right one when I realized I smiled every time I opened the email.

I'm not sure what's next but I'm guessing as far as the cover is concerned, it's the back copy. I might let my husband chose the author photo. He has some very definite ideas. As long as it's not one from when I was twenty I'll probably let him make that selection. 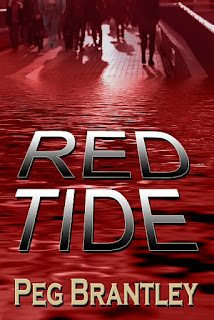 CR: Darkness at the Edge of Town by J. Carson Black. (I'm such a slow reader.)


It's all better with friends.
Posted by Peg Brantley at 4:16 PM 4 comments:

Why I've Done What I've Done—And How

I was asked recently how I chose an editor, and why I made the decision to go indie. Here's  pretty much the verbatim email I sent:


I approached a few editors, got some sample edits, and tried to get a feel of whether or not we might be a good fit. That's my best advice. It's a little bit of a crapshoot, but at least it's not like being "assigned" an editor when you're with a publisher. You may or may not know this, but I have met and become friends with a few editors. I elected not to pursue a working relationship with them simply because of our friendship. I ended up choosing Harvey Stanbrough. I was totally impressed with his few-page sample edit and believe I'll be able to learn a lot from him.

Why I decided to go indie: There are a few reasons. On one hand there were those hoops you're required to go through on the traditional side. I began to wonder what those "hoop-masters" knew that I didn't, and just who gave them the power to decide. And began to realize that I would be at the whim of both a publisher and an agent—not to mention the tremendous changes occurring in the industry. I've known more than one author who has been "laid off" even in the middle of a contract with a publisher. On the other hand, a year ago this month, I shared a room with L.J. Sellers at the Left Coast Crime conference in Santa Fe. At that time, I'd gone from having my nose in the air about becoming an indie to sitting on the fence. After listening to L.J.'s experience, and learning that she's able to make an actual living off of her writing now, without dealing with any of the traditional middle men, I decided I'd rather take my chances more "face-to-face" with readers. I know some will not like my writing, but I'm hoping others will. There is no gatekeeper. I like that. The readers get to decide. Not some person who has to figure out how to "sell" my story.

There was never any doubt in my mind that I'd want to hire a professional editor—one who can evaluate characterization and plot and any other areas I'm weak in, not just grammar and punctuation. I believe Harvey will fill that bill. Even editors need editors, and writers who think they can just throw something up for sale (even if they think it's perfect) won't succeed in the long run.

With respect to a cover . . . you and I have both seen the homemade covers. They scream amateur and lack of editing. A cover, in the little tiny thumbnail picture that Amazon provides, can make the difference between someone checking out your description or moving on. That's our shelf space. Some people are able to create their own covers, and that's great. I'm creative enough that maybe I could figure things out at some point, but not without a lot of time, effort and potential disaster. So I hired Patty Henderson, at Boulevard Photografica, who has designed some absolutely compelling covers. She's also an author (as is Harvey), and designed both of Andrew E. Kaufman's covers and I fell in love with both of them. Oops . . . all THREE of Drew's covers. He just came out with a short story that I'm betting Patty designed as well. Check out Drew's website at http://www.andrewekaufman.com/ I'm over-the-top excited to see what Patty will come up with for RED TIDE.

One more thing, while I've got your attention. Make your book available in trade paperback. I'm told, but can't confirm it yet, that it's pretty easy through CreateSpace. L.J. tells me that she sells one paperback for every hundred ebooks she sells, but it's still the reader who matters. Through CreateSpace, once she's set up, it doesn't cost her anything additional to sell a book, although her royalties are much less. Still, there are readers who either can't afford an e-reader, don't like reading on their computer, or insist the only way to hold a book is to turn the physical pages.

CR: Darkness on the Edge of Town by J. Carson Black.

Do You Need an Editor?

And today at Crime Fiction Collective, I've listed a few things to consider.
Posted by Peg Brantley at 5:00 AM 2 comments: