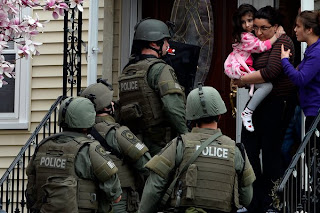 A term I'd never heard before. A term I've heard countless times today. Shelter in place. A term I hope never to hear again in my lifetime unless it applies to weather.

I think a side-effect of Boston is exhaustion. Did I sleep last night? Yeah, no better or worse than usual. So it isn't lack of sleep. It's Boston.

A friend of mine went on Facebook and said that she'd been watching the news and felt like she was living in a Bruce Willis movie. And she was very sad. I couldn't disagree.

As human beings I think we can all agree that we're both exhausted and saddened over the events of the last few days, whose violent beginnings were at one of the preeminant marathons in the entire world. And, as of the time I'm writing this post (five o'clock Friday evening in Colorado) it's not yet over. I want it over. I want the authorities to bring our world back to normal and I want to move on.

As a crime fiction writer, I have a lot of questions. 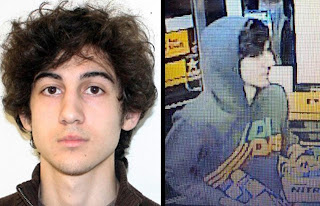 Focusing on the youngest brother, what happened between the time he was in high school and a year or so later? What event or idea or influential person took this normal to great kid (from all accounts) and changed his course completely?

How did these at one time engaged young men walk among the spectators at the Boston Marathon with bombs strapped to their backs and not think about the lives of the people they passed?


What abou you? What are you thinking and feeling and wondering about?

It's all better with friends.
Posted by Peg Brantley at 5:23 PM 1 comment:

It's a short post. It's at Crime Fiction Collective.

It's about not giving up on your dream.


And truly, it's all better with friends.
Posted by Peg Brantley at 12:00 AM No comments:

Bill Thompson, of The Bookcast and Eye on Books, interviewed me Wednesday regarding The Missings.

I was nervous but in the hands of a professional interviewer, I don't think it really shows. Too much.

I submitted the information Bill requested for consideration for an interview and to my delight I was accepted. We scheduled a time for his Skype call and that was about it.

When he called Wednesday, we chatted a few minutes for a couple of reasons: 1) he could check our audio; and 2) he could put me at ease enough so I wouldn't throw up in the middle of the interview.

Afterward, we chatted a few minutes while he confirmed everything was a go. A twenty to twenty-five minute easy conversation was distilled into a fifteen minute interview.


It's all better with friends.
Posted by Peg Brantley at 7:54 AM No comments:

Thanks to the generosity of several fiction authors, some beautiful auction items have been put together to benefit a very special organization. Visit Crime Fiction Collective for the details.

It's all better with friends.
Posted by Peg Brantley at 8:03 AM No comments: